A panic attack is the body’s natural alarm system (the fight-flight response) going off unnecessarily. Your brain thinks there is an immediate danger and sounds the alarm, a bit like a faulty car alarm that goes off every time it rains.

The symptoms of panic attacks such as feelings of dread, pounding heart, tingling skin, shortness of breath and tunnel vision are the fight or flight responses intended to keep you safe from a threat such as a physical attack. Sometimes though there is a build up of stress in the body over time that is then misinterpreted by the body as a present threat.  A threat to the ego such as giving a presentation as well as a threat to th physical body can also activate the fight or flight response.  The important thing to know about a panic attack is that it is a false alrm.

Fear of having another panic attack, and/or avoiding places and circumstances where you believe an attack could occur, could be signs of Panic Disorder or Panic Disorder with Agoraphobia.

CBT is an effective, clinically-proven treatment for panic attacks, panic disorder, and related avoidance. Studies show that CBT is as effective as medication but with better long term results. 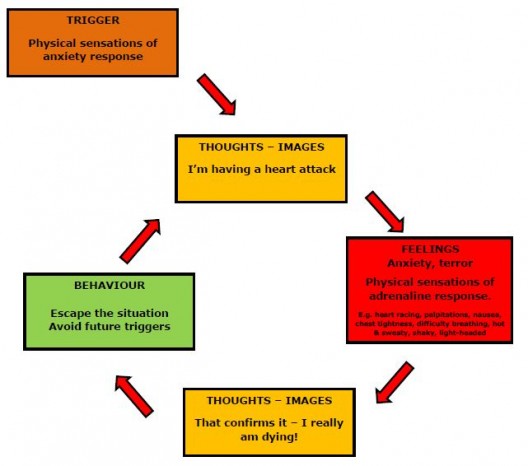 PUBLIC SPEAKING: "Nicola engenders trust very quickly and gets to work identifying and amending the perceptions and behaviours that are causing an imbalance in your life. The results were immediate and I left the consultation calm and in control."
Mark
View All Testimonials